A desire by some neighborhood boys to do community service led to the creation in Alpha Omega of an innovative program to both satisfy this desire and enable the chapter to influence the development of several future Omega men.

In 1960, the chapter set up a program called “Les Jeunes Hommes”–Young Men–in part as a way to develop an interest group among local prospective college entrants, wrote then-Alpha Omega Basileus Wendell Morgan in a letter May 23, 1961, to Grand Counselor Carl A. Earles. James W. Quander, initiated in Alpha Omega in 1958, and the founder of the program said the program grew out of a desire expressed by his son Rohulamin in 1959 and other boys in his neighborhood about a mile from Howard University to do some community work. “My son Ro was in high school at Carroll and had boys interested in community service work who were good friends of his,” said Brother Quander. “He said they wanted to do community service work. The first meeting was at my house here,” where he still lives. “They were in my scout troop. I asked the fraternity about its interest in doing work with the less fortunate and elderly. [Members of Les Jeunes Hommes] did tutoring and other kinds of things. They came from public and private schools. Some men in the fraternity thought this program had potential for bringing new blood into the frat.”

Origin of the Group’s Name

The name of the organization came from Brother Rohulamin Quander. “I was studying French at the time, and it seemed a perfect name because that’s what we were–young men.” The reason the idea caught on, he said, was that “D.C. is a perfect club town. Lots of guys were into clubs, as were girls. The idea of belonging to something and having some kind of name to it was important.”

Ro Quander said his inspiration for such a group came when he and his father returned from the 1959 Grand Conclave in New York City. “I came back and felt we needed to have a youth group that could take the principles of the fraternity and get young men in high school involved in the same things as the [fraternity’s] cardinal principles called for and get them to take on the responsibilities that went with doing that. I suggested a club that would offer those things and that could be an interest group for the frat. I felt that even if they didn’t become members [of the fraternity], we would still have the name of the fraternity out there, taking interest in youth.” Alpha Omega had already demonstrated its interest in having some sort of group made up the sons of brothers of the fraternity. In a report issued for the May 8-19, 1959, Third District Meeting in Portsmouth, Va., Alpha Omega Basileus William D. Martin Sr. wrote among the social affairs held by the chapter that year were two parties for sons of Omega men. “The chapter provided the Omega house, the house hi fi system, invitations, and refreshments for the sons of Omega parties,” he wrote. These socials were planned by seven Omega sons who were in the high school graduating class of 1958. The first party, which was given in September, provided our sons with an opportunity to get acquainted with Omega before going to college, while the second party, which was given during their Christmas vacation, served as a reunion.” Les Jeunes Hommes held its inaugural meeting on January 17, 1960, at the Quanders’ home, according to records preserved by James Quander in a scrapbook. At its second meeting February 21, the group developed its constitution and bylaws, using samples of others’ documents, and set membership dues at 50 cents a week. James Quander, as well as John Oliver and Baisel Oliver, both members of Alpha Omega, provided advice. Founders of the group petitioned the chapter for official recognition. On March 19, 1960, Alpha Omega agreed to sponsor the group and took it over as one of the chapter’s programs. The club’s members met for the first time on April 10 at the Washington, D.C., chapter house on Harvard Street with Alpha Omega Chapter members Everett “Cutie” Carter, William Aden, Baisel Oliver, and James Quander. And on May 8, the group’s approved its constitution and a crest, Rodin’s “The Thinker,” which was later used as the design for a patch worn by members on special occasions. Its official introduction to Alpha Omega was on October 21, 1961, when the group presented both its members and gave a gift to the chapter, a punch bowl set, as a token of its appreciation, according to a report of this activity written by the chapter.

The group focused on students who were in the 11th and 12th grades, as well as freshmen in college. The group did work around the city, including joining other young people from around Washington to lobby the U.S. Congress in February 1962 for more money for D.C. school supplies. The House and Senate Appropriations Committee held the city’s purse strings during this time, so young people, such as Les Jeunes Hommes, fanned out across Capitol Hill to try to convince Congress to increase such funding. They also did work at senior citizen homes, as well as painted what was then the Merriweather Home for children waiting for court settlements, located across the street from Howard University and what was then Banneker Junior High. They also did farming at a plot on 14th Street under the aegis of a D.C. Recreation Department program. The fruits and vegetables harvested from that plot were given to low-income families, according to a article reporting on the effort. During the times when the Mardi Gras was held at the D.C. Armory, the group’s members parked people’s cars and helped them to carry in their bags containing food and drinks.

Brother Kenneth A. Brown, whose oldest brother was in Les Jeunes Hommes, remembers his brother coming home from the Mardi Gras and the excitement in his voice as he talked about the people he had seen and the costumes they wore. “He got in around 2 o’clock in the morning, and all he could talk about was all the purple and gold that was all around the room and all the things he had seen and done that evening–just seeing the men you had seen in the community.” Moreover, during the 1961 Grand Conclave, Omega’s 50th anniversary celebration, the members of Les Jeunes Hommes had their meetings along with the conclave, as they were in charge of entertaining the youth at the meeting. They had basketball games, splash parties, rooms for entertaining young people, and handled tours of the city. “Everything was well planned,” Ro Quander said. “They played the role of providing youth activities.” And what were probably the first interracial visits at the fraternity house were held as a result of the Les Jeunes Hommes’ efforts, he added. The interracial visits occurred in October 1964, under the umbrella of a program known as “Interracial Home Visit Day.” On this day, more than 4,000 African-Americans and whites visited with each other to, according to an October 19, 1964, Washington Post article, “discuss ways of bridging the gap between the races.” The Les Jeunes Hommes program continued until around 1971, financed during its lifespan by Alpha Omega. Aimed at Counteracting Trend in D.C.

In his 1961 letter to the Grand Counselor–aimed at getting a reading on whether the chapter could incorporate the name Les Jeunes Hommes–Brother Morgan said the group was set up with the intent of counteracting a “strong trend in Washington of local college boys toward one of the other fraternities. The project has been successful. The club known as the Les Jeunes Hommes numbers among its membership sons of Omega men as well as sons of other fraternity and non-fraternity fathers. Our chapter includes the activity in our regular budget, and the group uses the fraternity house as its meeting place for business and social meetings.” Morgan, in raising questions about incorporation as a way to reserve the name for Omega’s exclusive use, said his hope was that other graduate chapters would set up similar programs under this name.

In his response dated June 5, 1961, Grand Counselor Earles said, “Incorporation alone would not necessarily secure the exclusive use of the name for all purposes, but it could be protected by the [chapter’s] uninterrupted use [of the name] for a given period of time.” “What period of time necessary to bring about this particular effect depends upon the facts and circumstances surrounding the use of the name by the fraternity,” he said. “In other words, if another person or organization attempts to use this name, we may be able to succeed in preventing its use by showing that the fraternity and or chapter has used it for a period of time as that the name acquires a secondary meaning, thus creating property rights in the fraternity. It may be well also that this matter be presented to the Grand Conclave in the form of a resolution, so that all chapters with interested groups such as yours will be required to use the name.” The Grand Counselor further advised that before any attempt was made to use the name throughout the fraternity, that Alpha Omega should “initiate the program and use it for perhaps one or possibly two years and then present the matter to the Grand Conclave to have the same become part of its national program. I believe that in that way, there would be greater chance for success for acceptance by the fraternity at large.”

At least one chapter of the fraternity inquired about the program. Rho Psi Chapter at Tennessee State University wrote James Quander on September 1, 1961, asking for a copy of Les Jeunes Hommes’ constitution and any other items Quander could provide. Rho Psi Basileus Philmore Graham said the chapter had an interested group of 175 students in four schools near the Tennessee State campus. Quander said he sent the chapter the information but never heard whether it actually set up its own Les Jeunes Hommes.

Members Who Entered the Fraternity

Among the men who entered Omega Psi Phi after being members of Les Jeunes Hommes were Rohulamin Quander, Bryant Van Brackle, Flavius Galliber, and Dennis Parker, all of whom entered through Alpha Chapter, and Alfred Neal, the group’s first president and a graduate of Morehouse College. “What it meant was that these young men had identified with the frat through the organization, and now they were coming forth to make active application for membership,” said Ro Quander, who was the group’s second president. “We had about 35 – 38 fellows who came into the fraternity.” In fact, he said, being a member of Les Jeunes Hommes ultimately became an advantage for these young men. While mention of the organization during an interview for membership in Omega Psi Phi did not guarantee acceptance into the pledge clubs in place during those times, Ro Quander said he does remember that the mention of the organization was, in general, seen as more of a plus among members of the chapter where the young man was seeking membership than as a negative.

The group moved from vibrancy to life support in the late 1960s when its founder entered the seminary and Alpha Omega had a hard time finding someone to carry on the program. Its death came around 1971, a victim of the Black Power movement and students’ feelings that black fraternities were no longer relevant. “We need the organization more now than ever, given the issues facing society,” the senior Brother Quander said. “It should never have broken up. 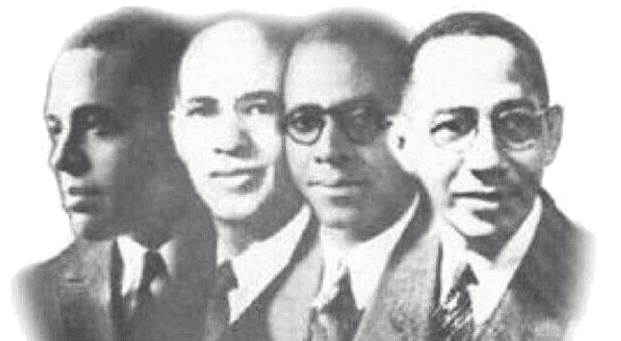